Much like the rest of Soho, St Patrick’s has a unique and fascinating history. From 1690 to today, St Patrick’s has over 330 years of history, full of strange and wonderful events and intriguing characters that have passed through over the years. The St Patrick’s Church that we know today was consecrated on the 29th of September, 1792 and was likely one of the first Catholic parishes established after practising Catholicism was made legal again in England.

Here is just a brief overview of our history.

A brief history of St Patrick’s

In 1690, when only the privileged lived in Soho Square, the Earl of Carlisle established his home here. Around 1760, it was leased by one Mrs Cornelys. An opera singer, serial bankrupt, and socialite, she had a child fathered by Cassanova.

Carlisle House became a venue for dazzling soirées, recitals, and concerts. Leading figures, including the Prince of Wales, gravitated here to satisfy their cultural, musical and other appetites. However, Mrs Cornelys’ fortunes changed and she was jailed for bankruptcy. Surrounding Soho Square was the squalid area of ‘The Rookeries’ immortalised so graphically in Hogarth’s picture ‘Gin Lane’. This was home to destitute immigrants, many of them Irish. To add to their misery, the anti-Catholic laws denied them the comfort of the Sacraments and support of a parish priest.

Occasioned by the Relief Act of 1791, an Irish Franciscan Friar, Father Arthur O’Leary, managed to raise funds to lease Carlisle House with the help of a group of prosperous Irish Catholics who were equally moved by the misery of London’s poor Irish. In 1792, on the 29th of September, St Patrick’s was consecrated on the site where the existing elegant Italianate building we now know was later built.

St Patrick’s is the first church in England, at least since the Reformation, dedicated to the patron saint of Ireland. It was also one of the first Catholic parish churches established after the passing of the Catholic Relief Acts of 1778 and 1791, which brought freedom of teaching and worship. 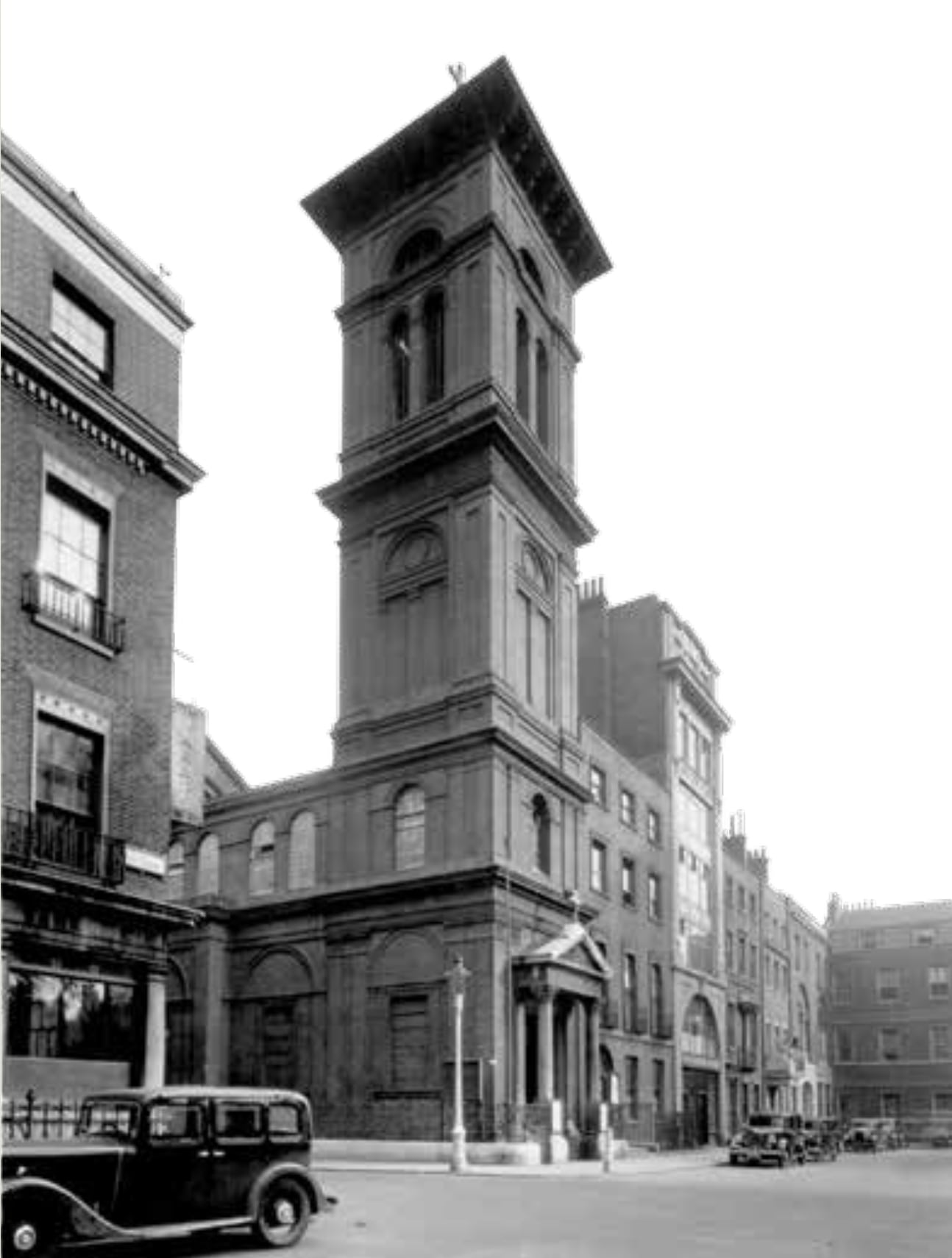 Even in its early days, the church was the scene of several major religious events, most notably the official requiem for the repose of the soul of Pope Pius VI. The annual procession honouring the Tyburn Martyrs stops at St Patrick’s as it makes its way from the Tower of London to Tyburn, as a relic of one of them, Saint Oliver Plunkett, is housed in the Church.

An important visitor to the church was Archbishop Fulton Sheen, the first Catholic television evangelist. A regular preacher between the 1920s and 1960s, he was a man of not only enormous renown but also great holiness. His cause for beatification has been opened. He often described himself as the “unappointed curate of the Parish,” and stayed in the Parish House on many occasions. His public talks were so well attended that the congregation would often spill out onto the street.

One story of Archbishop Sheen’s time here was the famous occasion of when a somewhat inebriated woman called at the parish house. She was known as a lady with many boyfriends and was also well used to the stage which was ever plentiful in Soho. Father Sheen took her into the Church, spoke to her of the Cross and Passion of Christ and heard her confession. It was an extraordinary day in which, as a result of conversation, kindness and conversion this woman soon entered an enclosed convent of nuns and spent the rest of her life there. This is just one story among many of those who have been rescued, graced and nurtured by stopping in on the Church. 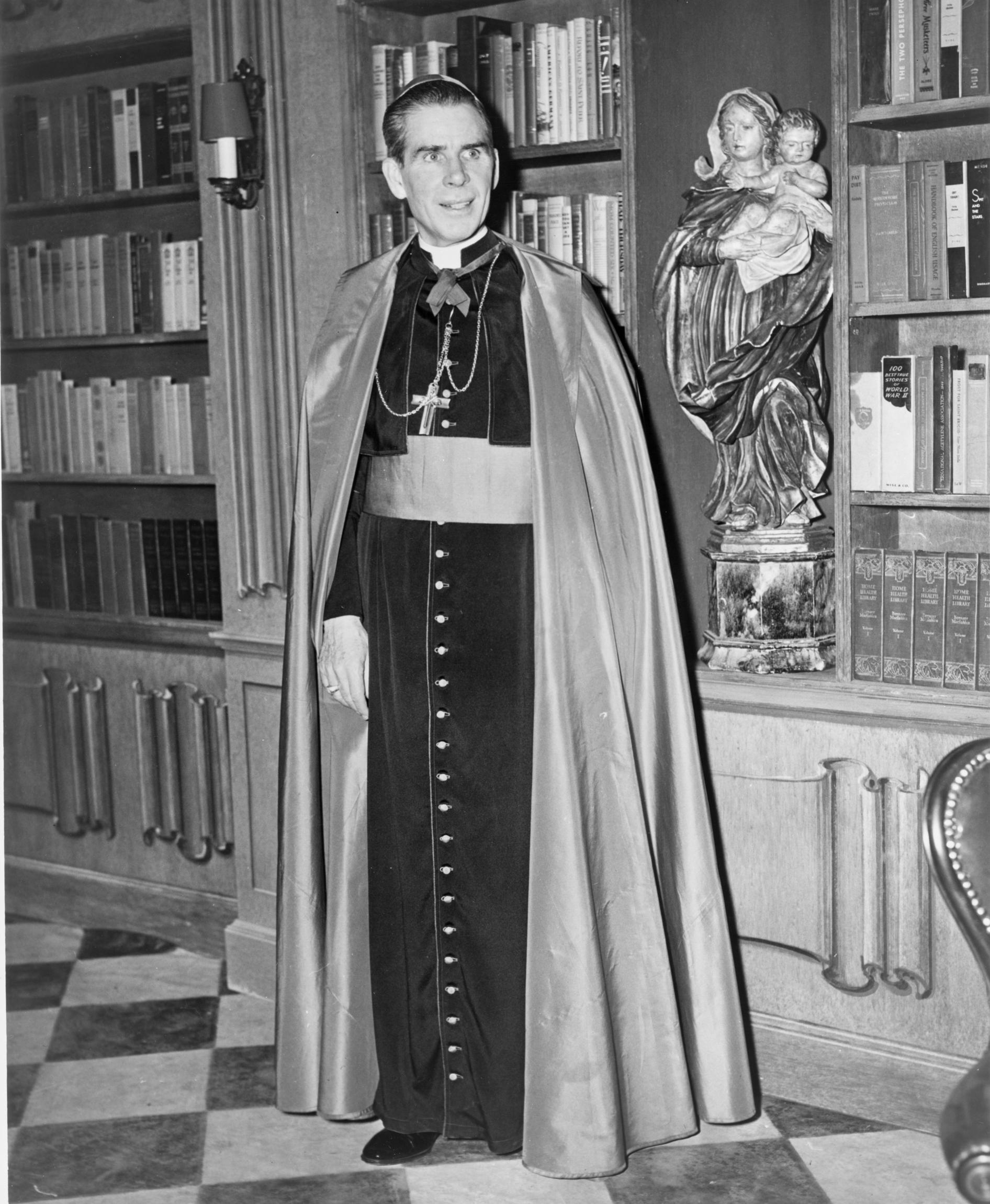 The church’s patron, St Patrick, was first and foremost a missionary. The missionary endeavour has always been at the very heart of the parish’s desire to evangelise, to provide the sacraments, and to prepare its flock for the final meeting with God. 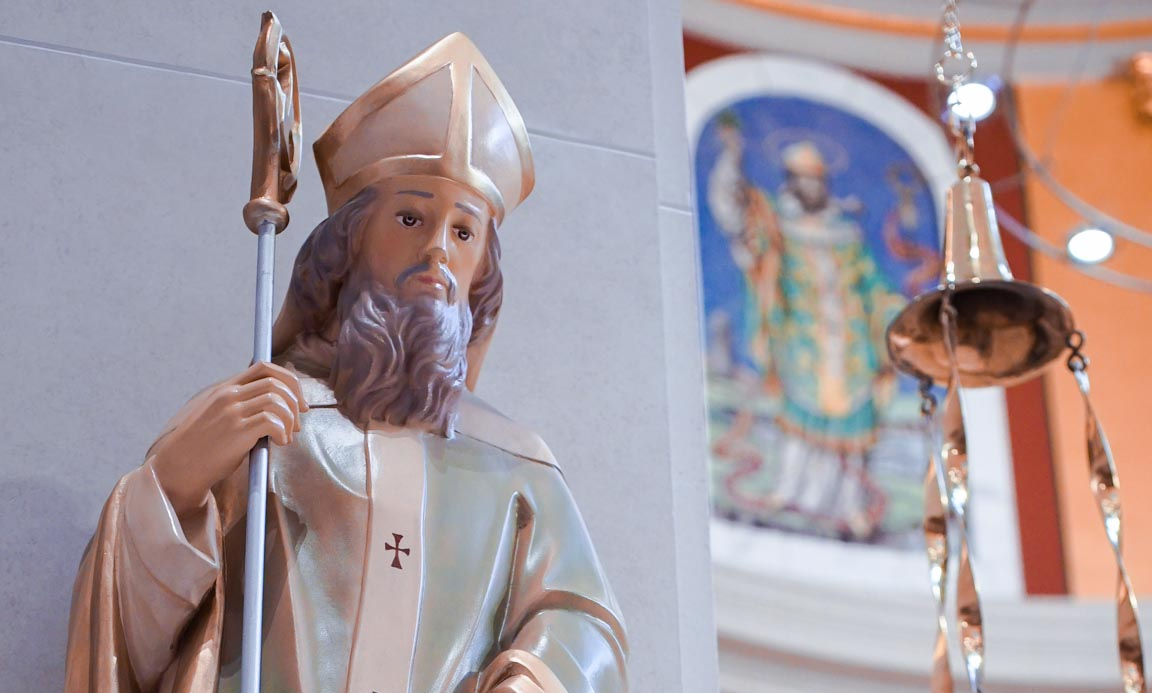 A poem in honour of St Patrick’s

‘In the paradise of word games,
Imagine a stranger pair of names;
And after the drunks in Soho Square
The peace inside was doubly rare.
So visiting London, I went back,
And said a prayer near the bronze plaque
A grateful rector placed inside
in thanks for the night he nearly died:
A German bomb had cracked the roof,
The pastor left plaque as proof,
As if to tell the Soho poor
Eternity doesn’t always use the door.’

Read about our patron saints